"What Does Your Kennel Name  Mean?"

A question that I am asked very often is :
"What does your kennel name mean?" Well, there is a special story behind the name of my kennel that I would like to share with you.

While trying to come up with a German name that described the sense of protection and security I felt from my Shepherds, I enlisted the help of Achim Cullmann. Who better to ask than a retired K9 instructor for the German Polizei? Achim and Sharon Cullmann were the breeders of my first German Shepherd, Kiana von Wolfstal.
Though undergoing treatment for pancreatic cancer, Achim was, as always, upbeat and eager to help. The following is what Achim shared with me:

Hi Lindsay, here are some thoughts about your kennel name. The correct words would be ....von dem Nachtwaechter. If you want to stay with this theme there are a few other words. Night watch is Nachtwache. Night patrol is Nachtstreife.
Nachtwaechter refers to the predecessor of the city police. His job was to patrol the streets of a city, typically surrounded by a fortified wall. The main task was to watch for any structural fire and sound a horn to alert the people. He was  armed with a hellebard, a combination spear that served several purposes. He also watched for possible intruders by patrolling an elevated walkway along the city wall. He was later replaced by the Schutzmann or protection man, which became subsequently the police and for along time police officers were still refered to as Schutzmann.
I think it is a fitting name for your kennel and I hope this helps you a little bit. At K-9 we always liked to use the quote "We own the night" because of the superiority of the dogs senses in the darkness.
If you have any other questions or if you need some help, just get in touch with me.
Take care, Achim


Sadly, Achim lost his battle with pancreatic cancer three months later; a month before Nachtwaechter German Shepherds came to fruition with the birth of Kiana's first litter. I'll always be grateful to both he and Sharon for their role in getting me engaged in this crazy, beautiful world of the German Shepherd Dog! 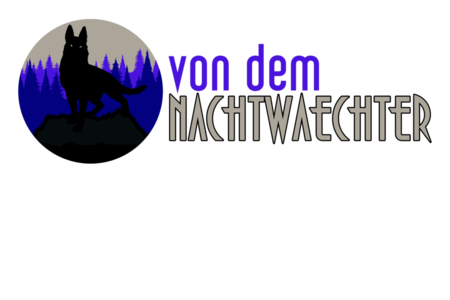